On opening the packaging, I was astonished by the small size of this CB Radio Transceiver measuring approximately 4” x 4”x 1”.  The Radio case is a sturdy, and a compact metal moulding with integral heatsink. The build inside the radio is modern surface mount technology with the output transistors mounted on the heatsink. The backlit display measures 1” x 0.75” and is easy to read. There is a built-in speaker with a socket for an external speaker if required. The radio is small enough to fit anywhere in the car and in my case, it fitted in a small space just below the car stereo system. 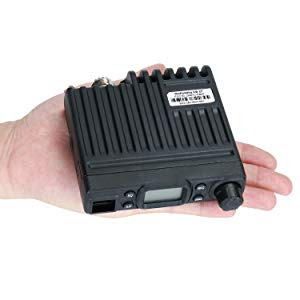 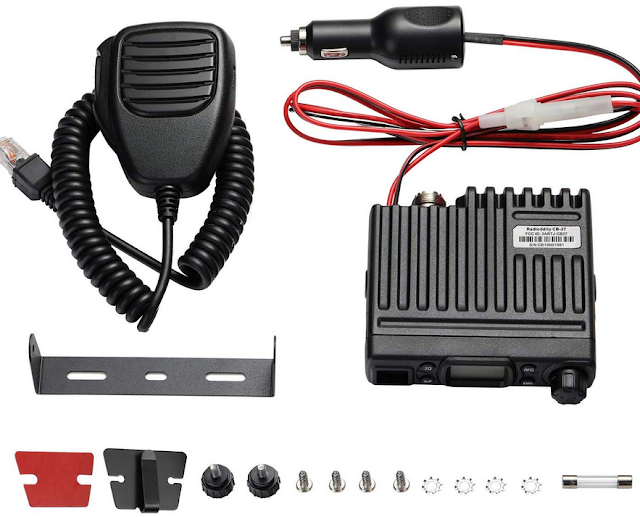 All the functions, except the volume control, are selectable by pressing one of the four buttons around the main display.
Taking each control one by one:

The radio is tuned on by turning the volume control clockwise further turning of the same control will increase or decrease the audio level. Changing Channels is achieved by pressing the up down buttons located on the top of the microphone.

Once any of the function buttons a pressed, the Up/Down/Buttons on the Microphone are used ot change the settings.

The squelch may be set by a brief press of the [SQ] button and there are a wide number of settings available. There are a wide number of settings so chose one that just cancels the noise for optimum sensitivity. The [A/F] button will enable the selection of AM or FM modes. A short press of the [EMG] button allows the toggling between channel 09, 19, or return to the last known channel in use. The [RFG] control will allow the sensitivity of the radio to be reduced if a strong signal is being received or increased for DX working. This control will also prevent a strong signal from blocking reception on adjacent channels.

The most notable feature was the crisp clear audio on both AM and FM modes. Initially I tended to talk too close to microphone thus over driving the set a little.  This was simply remedied by speaking a few inches away from the mic instead of holding it directly in front of the mouth. All reports of audio received by other stations indicated that the factory set level was adequate and gave clear reproduction over the air. The radio did not get excessively warm after a long over thereby proving that the heat sink was adequate to dissipate the heat from the Power Transistors whilst running at 4 watts of AM or FM.

The travel of the volume control was adequate and there was always a good strong, crisp, clear audio from the speaker in the radio itself. Moving from one channel to the other was achieved by pressing the up/down buttons on the microphone. The scan facility seemed a little slow, but this was not a problem as any activity from other channels would be picked up with no difficulty. This is not a facility I would generally use anyway but nice addition all the same.

Other good points include the fact that as a license free radio it has good range when set up using the antenna at the house. Conversations were had from varying distances across town and into country areas 35 – 40 miles away. From car to car, it was possible to have a conversation over good distances using the DV-27 antenna mounted on the roof of the car.

The radio is small enough to include in a portable radio kit for travelling into remote areas and has been operated from a solar panel trickle charging a 7 A/H battery.  Other uses would include communication from point to point during sporting activities or maybe on river or lake boat. Whether leisure activity, as company in the car or a casual chat across town, this radio is an excellent choice, very easy to install and use.